Anatoly Lavrenishin (Ukraine) is awarded for the win in the nomination "Animation" for the "Wandering between...".

Peter Vadocz (Hungary) is awarded for the win in the nomination "Experimental" for the "Shaking Life".

Cheung Kwok Man (Hong Kong) is awarded for the win in the nomination "Documentary" for the "Graffiti and Home Movies".

Emmanuel Marshall (Australia) is awarded for the win in the nomination "Fiction" for the "Brolly".

Head of the Jury: Nikolay Sergienko (photographer of documentary cinema)


4th Irpen Film Festival award by Spectators (the main prize of the festival - "Golden Film"): Ingo Schiller (Germany) for the "Growing through waiting".

We'd like to thank every person who took part in the 4th Irpen film festival. Create!

P.S. Total entries on participation at this year festival - 110, countries - 36. Competitive program of the 4th IFF consists of 40 films in 3 nominations. The organizers of a festival thank all authors who have sent their movies. If someone will not find out the film in the competitive program of this year, please be noticed, that all pictures which haven't taken part in the 4th festival will take part in selection of 5th IFF. 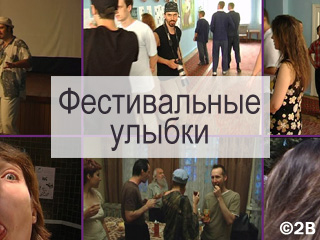 
The poster of the 4th Irpen film festival:

"Where the childhood was gone?" (Sergey Chepinoga, Ukraine, 2006)

Outside of competitive program:

Complete description of all films

© 2003-2006 "Young Kitten and old Dog". Designed by 2B.
Use of materials is welcomed under condition of the reference on "Irpen film festival" and www.g-2b.com.